The Salmon rises in the Salmon - Trinity Alps Primitive Area, one of the most isolated regions in the state, at the base of the Sawtooth, the only glacier in California's coastal range. The "Cal-Salmon" --so called to distinguish 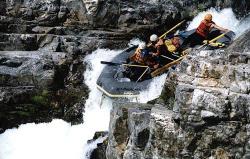 it from the better-known Salmon River in Idaho--is a charter member of the state Wild and Scenic Rivers System as well as one of the finest whitewater runs in the country. Until the late 1970's only a few kayakers had boated this river. Tom Foster, Bill Wing and Jim Cassady pioneered rafting here, and the river quickly became popular. But the river is rarely crowded.

Whitewater rafters soon find themselves in an intimate, steep-walled gorge, where sparkling green waters splash through an exhilarating series of Class IV - V rapids separated by deep quiet pools. Heavy precipitation -- 80 inches a year on average -- encourages the growth of lush forests along the river and feeds the brilliant side creeks that often drop down spectacular cascades into the main stream. Even in June, storms can move in quickly, so always bring wetsuits. The run can be extended by putting in at Methodist Creek on the South Fork, six miles above Forks of Salmon, and by running the Ikes section of the Klamath and taking out at Orleans.